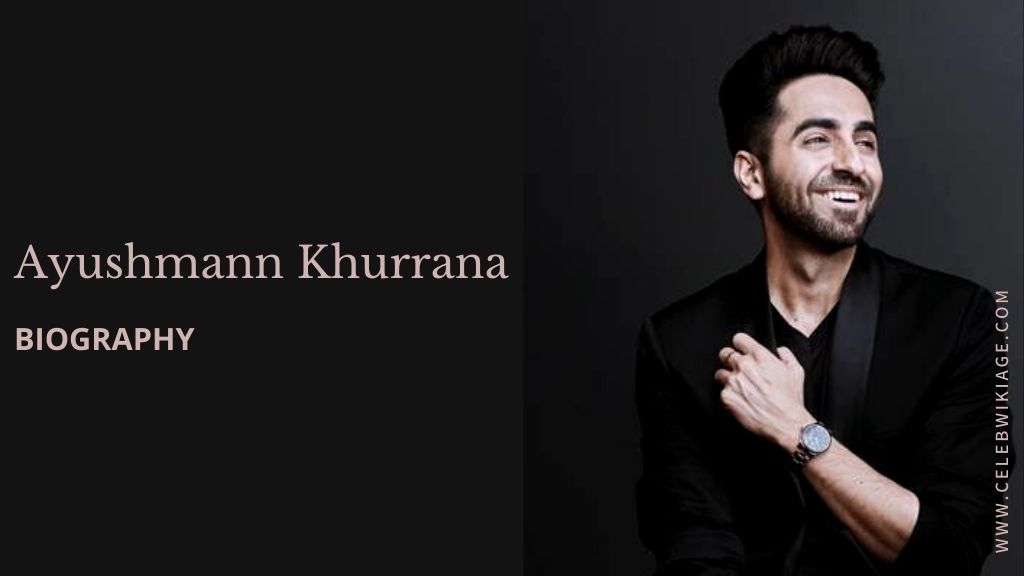 Ayushmann Khurrana is an Indian Actor, Singer, and a Writer in the Bollywood Industry. Few celebrities in Hindi cinema have an amazing fan following like Ayushmann Khurrana. He is one of the youngest rising stars in Bollywood. He appeared in several super hit movies.

Ayushmann Khurrana was born on September 14, 1984 in Chandigarh, his father P Khurana is a famous astrologer and also a famous writer on the subject of astrology, while his mother Poonam Khurana is a housewife. His brother Aparshakti is a radio jockey at 104.8 FM in Delhi. In addition, he is also a TV star, anchor and actor.

He did his schooling from St. John’s High School, after which he majored in English Literature at DAV College Chandigarh and earned a master’s degree in Mass Communication from the School of Communication Studies, Panjab University.

When Ayushmann was in school, he used to participate in the stage shows held in the school, he used to perform well in it. He wanted to become an actor since childhood. He got his inspiration from his grandmother, who used to mimic Raj Kapoor and Dilip Kumar.

Ayushmann joined the theater of Panjab University to enhance his acting skills.

He then became one of the founding members of DAV College’s ‘Aagaz’ and ‘Manchatantra’, an active theater group in Chandigarh. Ayushmann has participated and acted in many street plays.

Ayushmann worked as an RJ before starting his career.

Ayushman struggled a lot before making his Bollywood debut. And due to his struggle, he got a chance to play the lead role in the film ‘Vicky Donor‘ directed by Shoojit Sircar in 2012 and Ayushmann made his Bollywood debut with this film.

In this film, he also sang a song ‘Pani Da Rang‘, which was also very much liked by the people.

Ayushmann did a film in 2013, which was directed by Rohan Sippy, the name of this film was ‘Nautanki Saala’.

In the year 2014, Ayushmann acted in Yash Raj Films’ film ‘Bewakufiyan’, which was directed by Nupur Asthana. Apart from Ayushmann, Sonam Kapoor and Rishi Kapoor were also in this film. In this film, Ayushmann sang the song ‘Khamkhan’ along with Neeti Mohan as a playback singer.

In 2015, Ayushmann Khurrana worked in the film ‘Dum Lagake Haisha’. This film was made under the direction of Sharat Kataria.

In the year 2017, he appeared again on the big screen with the film ‘Meri Pyaari Bindu’. This film was a film directed by Akshay Roy. Parineeti Chopra acted in this film.

In the year 2017 itself, Ayushmann also played the main character in the film ‘Bareilly Ki Barfi’ and the film ‘Shubh Mangal Zyada Saavdhan’. Both these films were commercially successful.

In the year 2018, Ayushmann’s 2 films came ‘Andhadhund’ and ‘Badhaai Ho’. Both these films had attracted the attention of the people.

In 2020, he appeared in Shubh Mangal Zyada Saavdhan and the comedy-drama Gulabo Sitabo.

Who is Ayushmann khurrana’s wife?

What is the debut film of Ayushmann Khurrana?

Ayushmann Khurrana made his acting debut in the film ‘Vicky Donor’ in (2012) opposite Yumi Gautam. He also song the song ‘Paani Da Rang’ for this film. This film earned the Filmfare Award for Best Male Debut.

Where was Ayushmann Khurrana born?