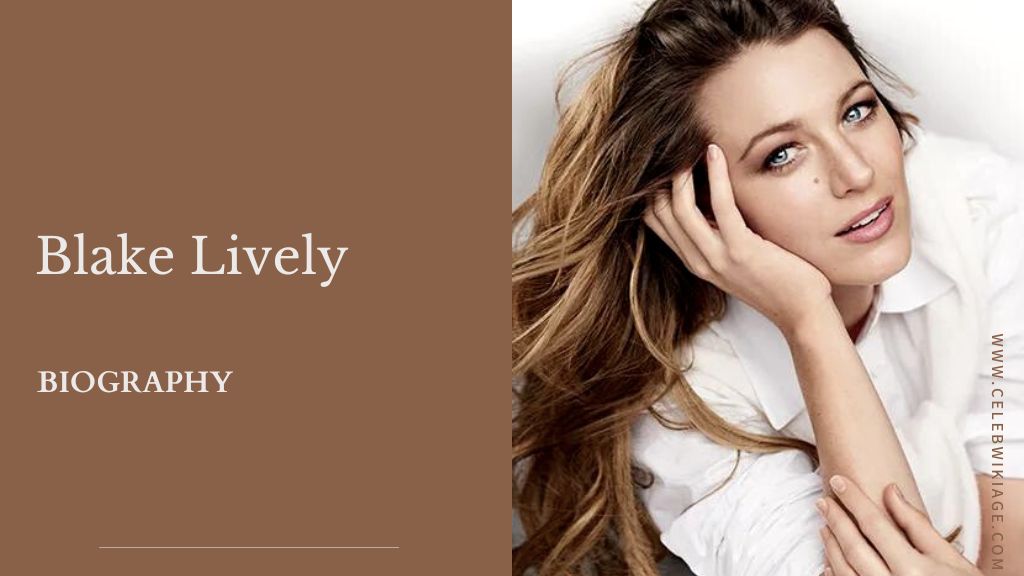 In 2021, she made her directorial debut with the music video for Taylor Swift’s “I Bet You Think About Me” to positive critical reception, and was nominated for an Academy of Country Music Award.

Blake Lively was born Blake Elender Brown on August 25, 1987, in Tarzana, California, to a show business family. Lively was named after her grandmother’s brother. She is of English, Irish, and German descent.

Her mother, Elaine Lively (née McAlpin), is an acting coach and talent manager, and her father, Ernie Lively (born Ernest Wilson Brown, Jr.), is an actor and teacher. Her brother is actor Eric Lively, and her half-siblings are actors Lori Lively, Robyn Lively, and Jason Lively. Both of her parents and all of her siblings are or have been, in the entertainment industry, and She followed her parents’ and siblings’ steps.

During her childhood, her parents took her to acting classes that they taught because they did not want to leave her with a babysitter. Blake Lively said that watching her parents teach acting helped her learn the “drills” and gain confidence as she got older and entered the entertainment industry.

She attended Burbank High School, where she was a senior class president, a cheerleader and a member of the championship choir. Her brother Eric asked his talent agent to send her on a few auditions over a period of a few months during the summer. From these auditions, she was cast as Bridget for The Sisterhood of the Traveling Pants (2005) and filmed her scenes in between her junior and senior years.

From 2007 to 2010, Lively was in a relationship with her Gossip Girl co-star Penn Badgley.

Lively first met Ryan Reynolds in early 2010 while filming Green Lantern, in which he co-starred.

Lively and Reynolds are close friends with singer-songwriter Taylor Swift, who named the characters in her song “Betty” after their daughters.

Blake Lively began her acting career at age 10, the role was Trixie, the Tooth Fairy in the musical movie Sandman (1998), directed by her father. She describes her role as a “bit part”. She was initially not particularly interested in acting and wanted to attend Stanford University.

Her big break came along a few years later, though. Blake was up to finish high school when she got the co-starring role of Bridget in The Sisterhood of the Traveling Pants (2005). Her performance earned her a Teen Choice Award nomination for Breakout Movie Star.

Blake was so perfect for the role of Bridget Vreeland that, with no big references or even auditioning, she landed the role. According to her, all she did was walk in and leave a photo of herself. It was clear that she was the Bridget needed. After the film, Blake went back to high school for her senior year to have the life of a regular teenager — or a very busy regular teenager. She was class president, a cheerleader, and performed with the choir.

After finishing her diploma, she immediately returned to acting, starring opposite Justin Long and Jonah Hill in the 2006 comedy Accepted. A year later, in 2007, Lively landed her most famous role to date on the CW’s hit teen drama Gossip Girl.

In 2009, she performs in the movie ‘New York, I Love You’. Following the year in 2010, she showed her terrific performance in the movie ‘The Town’.

With her dazzling good looks, natural acting talent, and devoted backing from devoted Gossip Girl fans, Lively seemed to be on the verge of breaking out as a top-flight movie star. In a January 2010 profile, Esquire called Lively “the most promising and interesting and talented young actress of the year.” She displayed a grittier side in her role as a young mother in Ben Affleck’s crime thriller The Town that same year. Both the film and Lively’s performance drew widespread critical acclaim.

In 2011, she played the female lead in the superhero movie ‘Green Lantern’. The movie, unfortunately, was not a commercial success.

In October 2013, Lively was named the new face of L’Oreal, marking her first major makeup campaign. Lively starred in the film The Age of Adaline (2015), opposite Michiel Huisman and Harrison Ford, playing a woman who “stops aging after recovering from a near-fatal accident.”

In 2016, Lively starred in the survival horror film The Shallows. It received positive reviews and Lively’s performance was praised by critics. That year, Lively also starred in Woody Allen’s romantic comedy film, Café Society which premiered at the 69th Cannes Film Festival and received critical acclaim.

In 2018, Lively starred in the mystery-thriller A Simple Favor, alongside Anna Kendrick and Henry Golding, and directed by Paul Feig.

In May 2021, it was announced that Lively will star in Lady Killer as the lead character, Josie Schuller. Lively made her directorial debut as the co-writer and director of the music video for Taylor Swift’s song “I Bet You Think About Me” featuring American singer-songwriter Chris Stapleton, released on November 15, 2021 from Swift’s re-recorded album Red ( Taylor’s Version) (2021).

In April 2022, it was announced Lively would make her feature directing debut with an adaptation of the graphic novel Seconds by Bryan Lee O’Malley, with Edgar Wright writing the screenplay and producing.