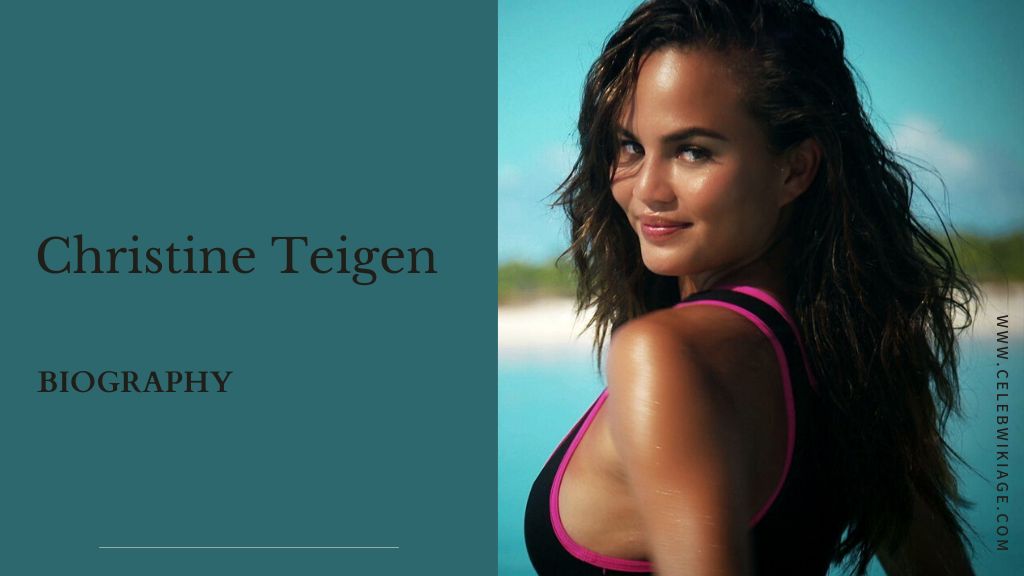 Christine Teigen is an American model and television personality. She made her professional modeling debut in the annual Sports Illustrated Swimsuit Issue in 2010 and later appeared on the 50th anniversary cover alongside Nina Agdal and Lily Aldridge in 2014. She formerly appeared as a panelist on the syndicated daytime talk show FABLife (2015–2016). She co-hosts the musical competition series Lip Sync Battle (2015–present) with LL Cool J and serves as a judge on the comedy competition series Bring the Funny (2019).

Teigen was born on November 30, 1985, in Delta, Utah, USA, to Ron Teigen Sr. and Vilailuck Teigen. During her childhood, her family relocated to different places, such as Hawaii, Idaho, and Snohomish, before settling down in Huntington Beach, California.

She met singer John Legend in 2007 on the sets of the latter’s music video ‘Stereo.’ The two dated for four years and Legend proposed to her on December 2011. He dedicated the song ‘All of Me’ to her, and she was featured in the 2013 music video. The two got married in Como, Italy on September 14, 2013. They welcomed their daughter Luna Simone Stephens on April 14, 2016, and their son Miles Theodore Stephens on May 16, 2018; their children were conceived through in vitro fertilization.

Christine Teigen was a briefcase model on the game show Deal or No Deal during the pilot and first season. She appeared in the Sports Illustrated swimsuit issue in 2010, and was named “Rookie of the Year”.

In The Year 2010, she designed and debuted a capsule collection with swimwear designer DiNeila Brazil at Mercedes-Benz Fashion Week Swim in Miami as well as appeared as a featured character in the 2011 Electronic Arts video game Need For Speed: The Run.

Two years later, Teigen was the host of the competition series Model Employee on VH1. She was also featured on another Cooking Channel special, titled Chrissy Teigen’s Hungry, detailing her wedding menu tasting .

In April 2014, Teigen played a fictionalized version of herself as a relationship counselor in an Inside Amy Schumer sketch. That same year, she appeared on the 50th anniversary cover of the Sports Illustrated Swimsuit Issue with Nina Agdal and Lily Aldridge.

In January 2015, Teigen guest starred on the sitcom The Mindy Project as the girlfriend of the man who took the main character’s virginity.

In February 2016, she published a book titled Cravings: Recipes for All of the Food You Want to Eat, which went on to become a New York Times bestseller and the second-best selling cookbook of the year.

In September 2018, she released her second book, titled Cravings: Hungry For More.

In 2019, she was included on Time’s list of the 100 most influential people in the world. The following year, Teigen appeared as a judge for the comedy competition series Bring the Funny. In November, she launched a cooking website, Cravings by Chrissy Teigen, which features recipes as well as restaurant and entertaining tips.

Some Facts About Christine Teigen

Who is Christine Teigen Teigen?

Teigen is an American actress, model, and television personality, who appears in the various songs and tv shows.

What is Christine Teigen Teigen worth?

Teigen net worth is $75 million