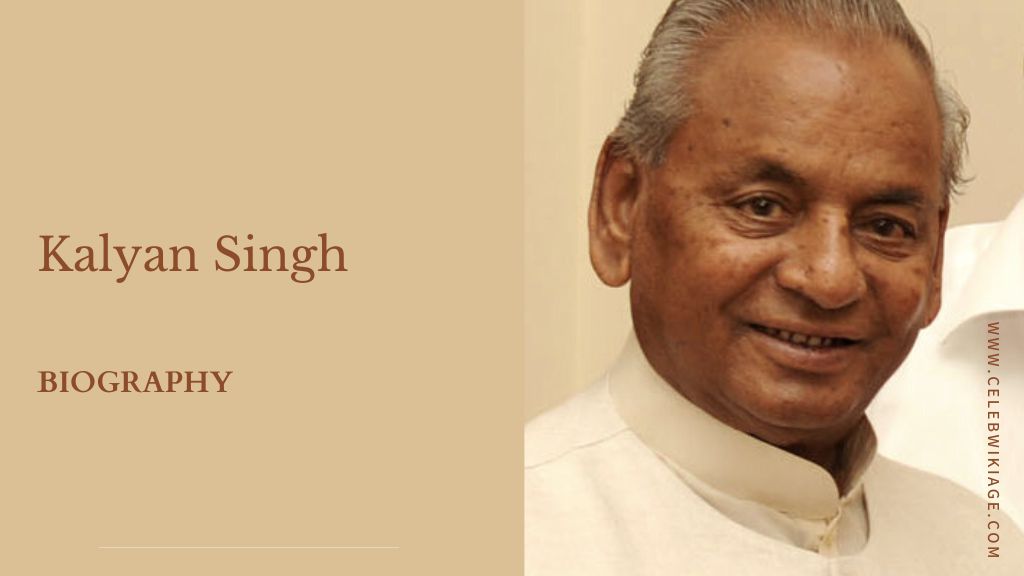 Kalyan Singh is an Indian politician who has also served as the former Governor of Rajasthan and former Chief Minister of Uttar Pradesh. Kalyan Singh was associated with the Bharatiya Janata Party.

On 21 August 2021, he breathed his last at the Sanjay Gandhi Postgraduate Institute of Medical Sciences (SGPGI) Hospital while fighting various ailments.

On the 73rd Republic Day, he has been honored with the 2nd Highest Civilian Award Padma Vibhushan, by the Government of India.

Kalyan Singh was born on 5 January 1932 in Aligarh district of Uttar Pradesh. He belonged to the Lodhi community. His father’s name was Tejpal Singh Lodhi and mother’s name was Sita Devi.

In 1952, Kalyan Singh married Ramvati Devi. The couple gave birth to a son (Rajveer Singh) and a daughter (Prabha Verma).

His son, Rajveer Singh and grandson, Sandeep Singh, are also politicians and members of the Bharatiya Janata Party. They also have a daughter named Prabha Devi.

For the first time in the year 1967, Kalyan Singh was elected to the assembly post in Uttar Pradesh and he held the seat of the assembly for about 13 years. He remained on this throne till the year 1980.

When Prime Minister Indira Gandhi declared a national emergency, during that time Kalyan Singh was sent to jail for 21 months.

In June 1991, Kalyan Singh was elected as the Chief Minister of Uttar Pradesh after the BJP won the assembly elections. On 6 December 1992, Kalyan Singh resigned from his chief minister’s post in the evening as soon as the Babri Masjid was demolished.

In November 1993, he contested the elections from Atrauli and Kasganj assembly constituencies and won both the constituencies. He has worked as the Leader of the Opposition.

She served as the Chief Minister of Uttar Pradesh for almost two years from September 1997 to November 1999. When his government was formed, to promote Hindutva, he told the classes of all primary schools to start studies only after Bharat Mata ki Aarti.

In 2004, at the behest of former Prime Minister Atal Bihari Vajpayee, he again joined the BJP party and closed his party. In the year 2004 itself, he participated in the Lok Sabha elections from Bulandshahr on behalf of the BJP party.

On 20 January 2009, he once again left the Bharatiya Janata Party and won the election by contesting as an independent candidate.

On 28 January 2015, Kalyan Singh was elected as the Governor (Additional Charge) of Himachal Pradesh and served the country for only seven to eight months as a Governor.

Due to deteriorating health, Kalyan Singh breathed his last on 21 August 2021. He died at the age of 89 at the Sanjay Gandhi Postgraduate Institute of Medical Sciences (SGPGI). He was suffering from sepsis and multi-organ dysfunction

Who was Kalyan Singh?

Kalyan Singh was an Indian politician who was the former Governor of Rajasthan and former Chief Minister of Uttar Pradesh.

When did Kalyan Singh die?