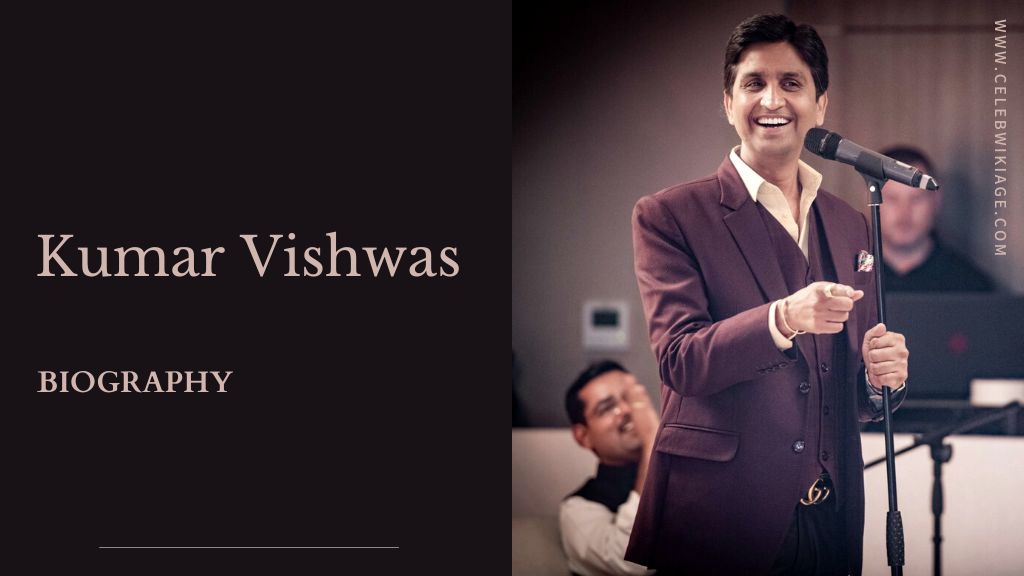 Kumar Vishwas is an Indian Hindi poet, politician, and a lecturer. He was a member of the Aam Aadmi Party (AAP) and a former member of its National Executive. Kumar Vishwas is a poet who went beyond the stereotypical norms of Kavi Sammelan or poetic functions and made it a performer’s stage. He has become an icon among the youth of India.

Dr. Kumar Vishwas was born on the day of Vasant Panchami on February 10, 1970, in a Gaur Brahmin family in Pilkhuwa, a small village in Ghaziabad district of Uttar Pradesh. His father’s name is Dr. Chandra Pal Sharma and mother’s name is Smt. Rama Sharma. Kumar Vishwas’s wife’s name is Manju Sharma.

His father was Lecturer at RSS Degree College, Pilkhuwa, Pilkhua. His mother is a housewife. Vishwas has three brothers and one sister.

His schooling started at Lala Ganga Sahay School, Pilkhuwa and after that he completed his Intermediate from Rajputana Regiment Inter College, Pilkhuwa.

Kumar Vishwas started his career in the year 1994 as a Professor in Rajasthan. He worked as a professor in Lala Lajpat Rai College for eighteen years. Taught Hindi literature to the students of higher classes. He had to leave this job in the struggle for the Anna movement.

As a Hindi poet, he rose to great heights and established himself as a poet of shringar-rasa.

A poem written by him “Koi Deewana Kehta Hai” became extremely popular among the youth. He has written many beautiful poems, Kumar Vishwas has a great contribution in reviving Hindi poetry, he took Hindi poems to the youth.

His other professional activities include penning lyrics for various title songs of TV programmes, working as a regular columnist writing articles for various magazines and many other publications, and also on various social issues.

Common people, famous politicians, journalists, business tycoons and famous personalities have all acknowledged and appreciated him as a poet and writer. The poems in his voice are used by major telecom operators as their caller tunes. He signed up with some of the reputed banners of Bollywood and television production houses to write the lyrics, screenplay, story and dialogues in his upcoming ventures.

The anti-corruption movement led by Anna Hazare saw Kumar Vishwas as one of the many proponents of the movement. He was also arrested on 16 August 2011 for supporting the movement.

The Aam Aadmi Party came into existence after Anna Hazare’s agitation. On the other hand, Kejriwal was of the opinion that since no progress was made through talks with various political parties, it was necessary to directly engage in politics.

India Against Corruption, the body guiding the movement, conducted a survey on the issue using social networking sites, the results of which indicated support for politicisation. Dr Kumar Vishwas was one of the many famous people who supported this move of Arvind Kejriwal.

A party was launched in Delhi on 26 November 2012 under the leadership of Arvind Kejriwal, and was named Aam Aadmi Party (AAP), where “Aam Aadmi” means “common man”. Dr. Vishwas became a member of Aam Aadmi Party. The party first contested elections to the Delhi Legislative Assembly on 4 December 2013.

Kumar also contested the Lok Sabha elections from Amethi, but was defeated.

Later, after differences with Arvind Kejriwal, Kumar ended his activism in the Aam Aadmi Party.