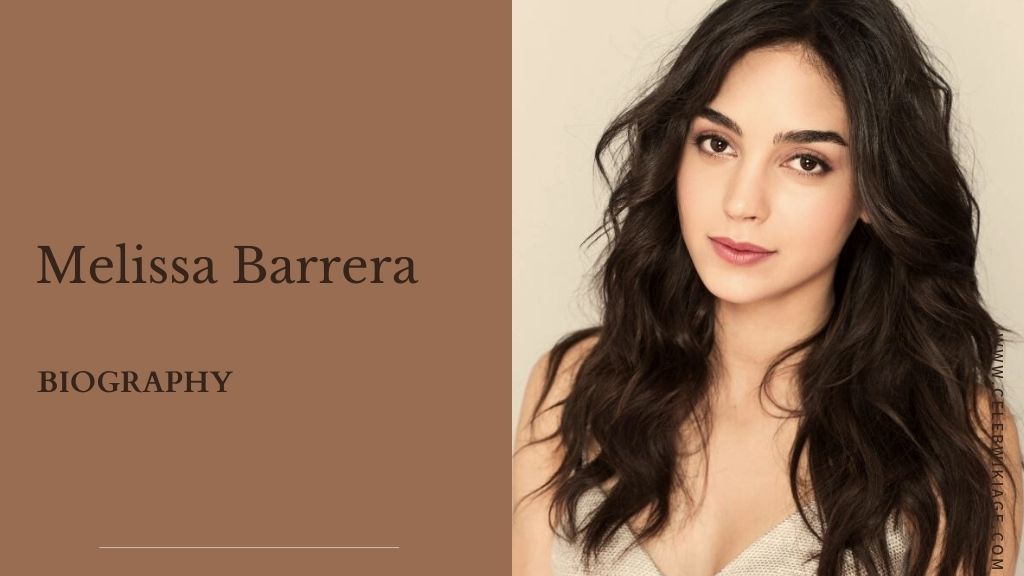 Melissa Barrera is a Mexican actress and singer. Her career began with roles in the telenovelas Siempre tuya Acapulco (2013), Tanto amor (2015), and Netflix produced series Club de Cuervos (2017). She gained further recognition for her lead role in the Starz drama series Vida (2018–2020). Barrera earned praise starring as Vanessa in the musical drama film In the Heights (2021) based on the Lin-Manuel Miranda stage musical. She also starred as Sam Carpenter in the slasher horror film Scream (2022) and upcoming in the sequel, Scream 6 (2023).

Melissa Barrera was born on 4 July 1990 in Monterey, Mexico. She is the daughter of Tomas Barrera and Rossana Martinez. Her father is a film producer. She has three younger siblings, with whom she spent the major part of her early life.

Melissa was schooled at the American School Foundation of Monterey. She later attended New York University Tisch School of the Arts, where she studied musical theater.

She has actively participated in theater throughout her middle and high school and appeared in musicals such as The Wizard of Oz, and Joseph and the Amazing Technicolor Dreamcoat.

While at NYU she starred in productions such as Sweet Charity and Brecht’s The Caucasian Chalk Circle.

Barrera married longtime boyfriend and musical artist Paco Zazueta, in February 2019. The pair first met on the set of La Academia in 2011, and performed a rendition of Enrique Iglesias’ “Cuando Me Enamoro” for its fourth episode. They shortly began dating in September of that year. The pair announced their engagement via Instagram in June 2017.

She attended the American School Foundation of Monterey where she appeared in the school’s musical productions including MUN’s Voices, Grease, Aida and Footloose. Her television debut was on the Mexican reality show La Academia in 2011, where she showed off her talent for singing. In 2013, she was part of the duet Melissa y Sebastian, with whom she recorded her first album and had her first top ten radio hit with her debut single “Mamma Maria”, a cover of Ricchi e Poveri’s song from the 1980s. In 2015, she recorded the theme song “Volver a caer” alongside the Mexican singer Kalimba, for her telenovela Tanto amor.

In 2010, while still in college (New York University), she participated in the film L for Leisure. In 2012, she participated in two telenovelas, La mujer de Judas and La otra cara del alma. In 2014, she obtained her first starring role in the telenovela Siempre tuya Acapulco. In 2015, she starred in the last telenovela produced by TV Azteca, Tanto amor. Barrera was cast in the lead role of Lyn on the Starz drama series Vida in 2018.

In August 2020, Barrera was cast as Sam Carpenter on the fifth Scream film, which was directed by Matt Bettinelli-Olpin and Tyler Gillett. The film was released on 14 January 2022.

In 2021, Barrera starred as Vanessa, an aspiring fashion designer and love interest of the narrator, Usnavi, in the Jon M. Chu directed musical film In the Heights, an adaptation of Lin-Manuel Miranda’s stage musical. The film earned widespread critical acclaim, with Monica Castillo of The Wrap praising Barrera’s performance: “Vanessa’s upbeat salsa anthem, ‘It Won’t Be Long Now’, is perhaps one of the more underrated sequences: It’s an impressive showcase for Barrera’s talents, giving her a wide range of emotions to move through in one number and one of the few moments in the musical to belt out.”

In November 2019, Barrera was cast in a musical film adaptation of the Frank Wildhorn musical based on the novella Carmen. Barrera was cast in the title role of Carmen. The film will be directed by French choreographer and dancer Benjamin Millepied in his directorial film debut.