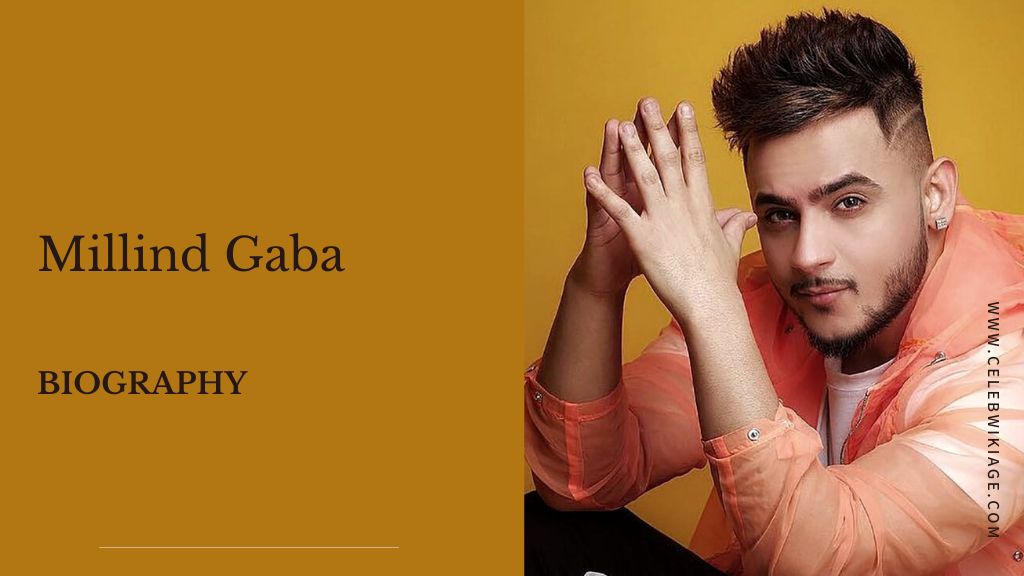 Punjabi singer Millind Gaba, also known as Music MG. Known for songs like the Welcome Back title track, Nazar Lag Jayegi and his debut series “4 Men Down”, Gaba is not only a singer but also a lyricist, composer, actor and lyricist. He is very popular in North India

Milind is one of the few Punjabi singers who have very quickly become the heartthrob of Punjab. He has sung many songs in Hindi and Punjabi. And every new song of Millind Gaba has become very famous.

Milind is most famous for songs like Aise Na Dekh, Yaar Mod Do and Nazar Lag Jayegi. Milind Gaba songs are popular not only in Punjab but all over India. He has also sung several Bollywood songs, such as the title track of Welcome Back and Saddi Dilli from Dilliwali Zalim Girlfriend.

Milind Gaba was born on 7 December 1990 to father Jatinder Gaba and mother Sangeeta Gaba here in Delhi. Milind’s father is a director of Punjabi songs. Milling’s brother’s name is Raja Gaba and sister’s name is Pallavi Gaba. Milind did his early studies from Ved Vyas DAV Public School which is located in Delhi.

His father’s association with the music world became an important part of Milind’s singing career. His father supported him a lot to make a career in singing.

Milind Gaba started his career in 2013 when he got a chance to work in the film Stupid 7. It was a Punjabi film and this film was also liked by the audience. After a few years, he decided to make a career in Musicline.

In the year 2015, Milind’s song Daru Party was launched, which was directed by Shabbi Singh and Kamaljot Singh. The Daaru party song proved to be very beneficial for Milind and due to this song, Milind came in the eyes of the people.

In the year 2016, the song Bholenath was directed by Kamaljot Singh and Ashish Rai with lead singers Milind Gaba, Ikka and Pallavi Gaba. In the same year, two of his songs “Aise Na Dekh” and “Yaar Mod Do” were also launched.

In the year 2017, his best songs like “Tera Ishq”, Main Teri Ho Gayi and Long Gawacha were launched. The famous song Long Gawacha was sung by Milind Gaba, Bups Saggu.

Songs like Teri Yaari, Kya Karu were launched in the year 2020. On 05 February 2021, people definitely got to hear the song named Pale Yellow by Milind.

Who is Milind Gaba?

What is the height of Milind Gaba?

The height of Milind Gaba is 5 feet 6 inches.

Why is Milind Gaba in discussion in the year 2021?

Milind Gaba remains a topic of discussion due to being a participant in the upcoming reality show Bigg Boss OTT in the year 2021.

Which was the first song of Milind Gaba?

Milind Gaba’s first song was 4 Main Down which came in the year 2014.

What is the caste of Milind Gaba?