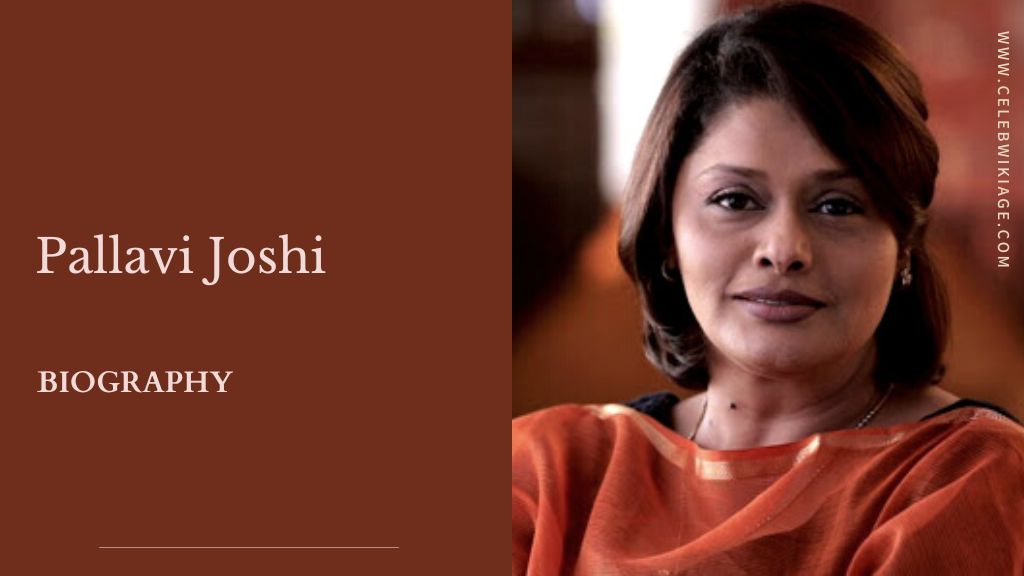 Pallavi Joshi is a film actress. She started her career as an actress at a very young age. She is the wife of film producer and film director Vivek Agnihotri.

Pallavi was nominated for Best Supporting Actress at the Filmfare Awards for her role in Andha Yudh (1988).

Pallavi Joshi was born on 4 April 1969 in the city of Mumbai, Maharashtra. His father’s name is Madhusudan Joshi and mother’s name is Sushma Joshi who has passed away. Pallavi has an elder brother named Alankar Joshi who is an actor.

Pallavi Joshi is married to Indian film producer and director Vivek A Gnihotri and they have two children, Malika and Manan.

Pallavi and Vivek together founded the ‘Buddha Foundation’. This NGO helps the misguided youth to be right and makes them strong in creative fields.

Pallavi started performing on stage at an early age. She acted in films like Badla and Aam Sadak Ka as a child artist.

She played a blind child in Dada (1979), who reforms a notorious gangster.

She played supporting roles as a sister or friend of the heroine in big budget commercial films including Saudagar, Pana, Tehelka and Mujrim.

She was nominated for ‘Best Supporting Actress’ at the Filmfare Awards for her role as a disabled girl in Andha Yudh (1988).

She also won a Special Jury Award at the 41st National Film Awards for Woh Chokri (1992).

She is also the recipient of Excellence in Cinema Award at 7th Global Film Festival, Noida.

She later hosted Sa Re Ga Ma Pa Marathi Little Champs, a televised singing competition on Zee Marathi. She appeared as Kasturba Gandhi in Shyam Benegal’s The Making of the Mahatma, (1995).

Her TV appearances include Mr Yogi, Bharat Ek Khoj, Justaju, Alpaveeram, Mrignayani, Talaash and Imtihaan, and his most famous Doordarshan serial has been Aarohan, a youth serial based on the Navy.

Justazoo was a weekly serial on Zee TV in 2002, which also starred Harsh Chhaya and Arpita Pandey. She starred in a thriller titled Yeh Kahan Aa Gaye Hum opposite Madhavan, which was abruptly stopped.

She has also played the lead role in the Marathi film Rita directed by Renuka Shahane. She is also a producer of Marathi serials and has produced serials on Zee Marathi including Sambhav and Anubhav.

Pallavi will currently be seen as an actress in the reality based film ‘The Kashmir Files‘ directed and produced by her husband. The film is currently based on the massacre of Kashmiri Hindus in 1990. The film The Kashmir Files was scheduled to release in August 2021, but due to the lockdown, it was postponed till the cinema halls reopened. The film was released in cinemas on 11 March 2022.

Some Facts About Pallavi Joshi

Who is Pallavi Joshi?

Pallavi Joshi is a film actress. She started her career as an actress at a very young age. She is the wife of film producer and film director Vivek Agnihotri.

Who is Pallavi Joshi’s husband?

She is married to Indian film producer Vivek Agnihotri.