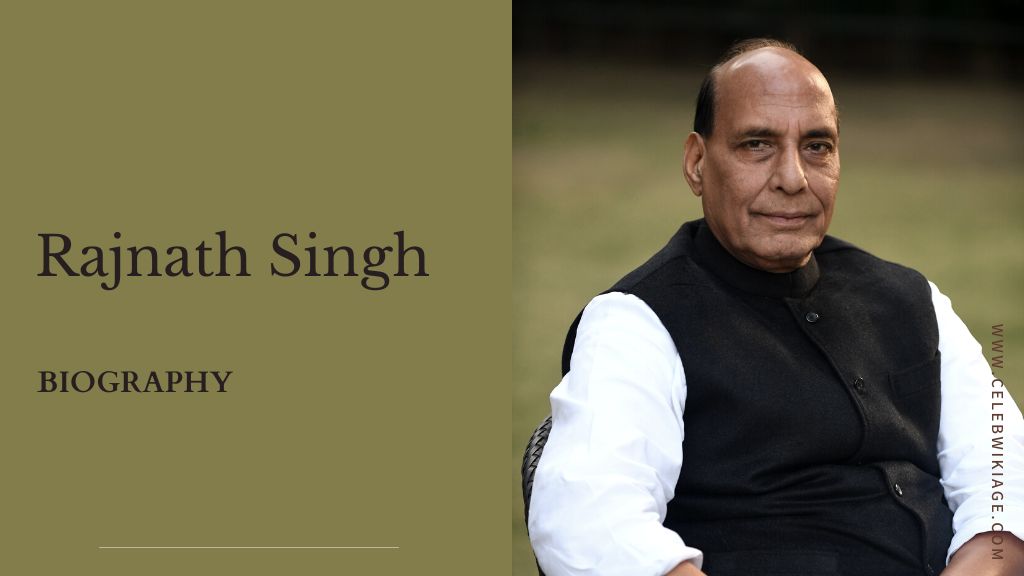 Rajnath Singh is an Indian politician serving as the Defense Minister of India. He is currently the Deputy Leader of the House Lok Sabha. He is the former President of Bharatiya Janata Party. He has previously served as the Chief Minister of Uttar Pradesh and as a Cabinet Minister in the Vajpayee Government. He was the Home Minister in the First Modi Ministry. He has also served as the President of the BJP twice i.e. 2005 to 2009 and 2013 to 2014. He is a veteran leader of the BJP who started his career as a RSS Swayamsevak.

Rajnath Singh was born on 10 July 1951 in Bhabhaura, Uttar Pradesh to Ram Badan Singh and Gujarati Devi in a Raikwar Rajput family. He received his primary education from a local school in his village and obtained a Master’s degree in Physics from Gorakhpur University.

Since his childhood days, he has been a staunch supporter of RSS ideology and joined Sangh at the tender age of 13 years. Before entering politics, he worked as a lecturer of Physics at K.B. Post-Graduate College Mirzapur, UP.

Rajnath Singh joined politics in 1974 as the secretary for the Mirzapur unit of the Bharatiya Jana Sangh, the predecessor of Bharatiya Janata Party. A year later, he was appointed as District President of the Jana Sangh.

Influenced by the JP Movement of Jayaprakash Narayan, Singh joined the Janata Party and was elected as MLA from Mirzapur. He was imprisoned during National Emergency due to his association with JP Movement. After his release in 1977, he was re-elected as MLA.

In 1980, he joined BJP, becoming one of its initial members. In 1984, he became the State President of the BJP youth wing and went on becoming the National President in 1988. He was also elected to the Uttar Pradesh Legislative Council.

In 1991, he was appointed as the Education Minister in the first BJP Government in Uttar Pradesh. He served for a tenure of two years and introduced the Anti-Copying Act of 1992, thereby making copying a non-bailable offence. The Act was however repealed when Mulayam Singh Yadav came into power.

In 1994, Singh was elected to Rajya Sabha and became involved with the Advisory Committee, House Committee and the Committee on Human Resource Development. In 1997, he became the State President of BJP in Uttar Pradesh and Union Cabinet Minister for Surface Transport in 1999. In his role as Minister of Union Surface Transport, he initiated NHDP, a dream project of former Prime Minister Atal Bihari Vajpayee.

In 2000, he became the Chief Minister Of Uttar Pradesh. During his tenure, he focussed on rationalizing the reservation structure in government jobs, stabilized law and order in the state, and inaugurated DND Flyway that connects Delhi to Noida.

In 2002, he resigned from the post of Chief Minister as BJP had minority status at that time in state politics. President’s Rule was imposed in the state and Mayawati became the next CM of the State for the third time.

In 2003, he was appointed as the Union Minister of Agriculture and Food Processing in the Vajpayee led NDA Government. During his tenure, he initiated a few projects including the Kisan Call Centre and Farm Income Insurance Scheme. He also brought down interest rates on Agriculture loans.

In 2005, Singh became the National President of BJP and worked tirelessly to strengthen the party on Hindutva ideologies. He also announced his position of “no compromise” in relation to the building of a Ram Mandir In Ayodhya at any cost. He also highlighted the developments under the Vajpayee led government.

Singh criticised the role of the English language in India due to extreme preferences shown to it at the expense of native languages.

He also suspended Jaswant Singh from the party who praised Jinnah and disrespected former Prime Minister Of India Jawaharlal Nehru. He resigned from the post after NDA lost the 2009 General Election. The same year, he was elected as an MP from Uttar Pradesh’s Ghaziabad.

On 24 January 2013, following the resignation of Nitin Gadkari over corruption charges, Rajnath Singh was re-elected as the party’s National President. He campaigned for the 2014 General Elections and declared Narendra Modi as BJP’s Prime Ministerial candidate despite facing opposition from within the party.

Amid protests over police action at JNU, Singh stirred controversy by claiming that the JNU incident was supported by  Lashkar-e-Taiba chief Hafiz Saeed. He also appointed an SIT for the investigation of the matter.

JNU Incident: Anti-national speeches were delivered in JNU Delhi over the anniversary of the hanging of Kashmiri Separatist Maqbool Bhat and Afzal Guru on 9 February 2016. Police arrested Umar Khalid and Kanhaiya Kumar in connection with the anti-national slogans.

On 9 April 2017, he launched  Bharat Ke Veer Web portal and Application with Bollywood actor Akshay Kumar, a fundraising initiative by the Ministry of Home Affairs, GOI for the welfare of the Martyrs’ families.

On 31 May 2019, Singh was appointed as Union Minister of Defence. After becoming the Defence Minister, he focussed mainly on increasing the defence budget of the nation, decreasing imports of weapons from other nations and make India an arms exporter with an arms industry.

Rafale deal was signed by the then Minister of Defence Manohar Parrikar in 2016 to strengthen the Indian Air Force. The fighter jets were received during his tenure as Defence Minister of India.

Amid the border standoff between India and China since May 2020, Rajnath Singh met with officials of the Indian Army and also visited the Ladakh Range. He also held meetings with  CDS General Bipin Rawat, CNS Admiral Karambir Singh and COAS General Manoj Mukund Naravane to discuss the situation.