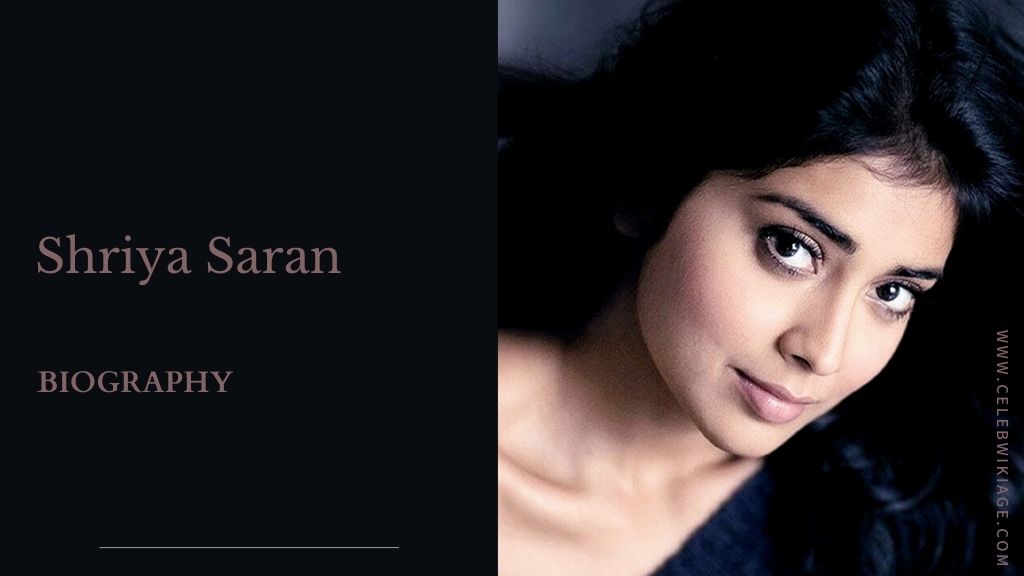 Shriya Saran is an Indian film actor. She began her career, acting in music videos, while also attending an acting studio to follow her dream to act. After her debut in 2001 with Ishtam, she gained Telugu cinema’s attention in 2002 by playing the role of Bhanu in Santhosham, her first major hit.

Following the film she appeared in several Telugu films with prominent actors, whilst also making in-roads in Bollywood as well as the Tamil film industry. In 2007, Saran became a national figure after her performance alongside Rajinikanth in Sivaji: The Boss, after which she signed several Bollywood, Kollywood and also a Hollywood film.

Saran performs predominantly in leading heroine roles in high-budget and major studio films, ranging from romantic comedies and drama to science fiction and action thrillers. Her most popular released films include Santhosham (2002), Tagore (2003), Sivaji: The Boss (2007) and Azhagiya Tamil Magan (2007).

Her father’s name is Pushpendra Saran works for the state-owned Bharat Heavy Electricals Limited and her mother’s name is Neerja Saran was a chemistry teacher at the Delhi Public School. She also has a brother named Abhiroop Saran.

On 12 March 2018, she married her Russian boyfriend Andrei Koscheev at her Lokhandwala residence. On 12 October 2021, Shriya Saran has announced on her social media platform that she and her husband has been blessed with a baby girl Radha, born on 10 January 2021.

While in her second year at the LSR College in Delhi, Saran got her first opportunity to appear in front of the camera for a video shoot. Following her dance teacher’s recommendation, she was invited to appear in the music video of Renoo Nathan’s “Thirakti Kyun Hawa”. Shot in Banaras, the video was seen by Ramoji Films who offered her the lead role of Neha in their film Ishtam.

In 2002, she starred in Santosham, co-starring Nagarjuna, Prabhu Deva and Gracy Singh, which was her first commercial success. The film took the Nandi Award for Best Feature Film and Filmfare Best Film Award (Telugu).

In 2003, Saran acted in a supporting role in her first Hindi film, Tujhe Meri Kasam, starring debutants Ritesh Deshmukh and Genelia D’Souza in leading roles. She performed as one of the lead female roles in Telugu film Tagore, along with Jyothika and Chiranjeevi which was screened at the International Indian Film Academy Awards, and was a commercial success.

In 2004, Saran acted in two Telugu and two Hindi films, including Arjun and Nenunnanu, where she played a student in classical singing. She had ten 2005 releases, nine of which were Telugu films, the most notable for her being Chatrapathy. There she appeared opposite Prabhas and earned her first nomination for the Filmfare Best Telugu Actress Award.

In 2007, she was chosen to play the lead female role opposite Rajinikanth in S. Shankar’s Sivaji: The Boss after Aishwarya Rai rejected the role due to busy schedules. which was the most expensive Indian film at that time.

Also in 2007, Saran made her comeback in Hindi cinema with Awarapan, which was a joint production between India and Pakistan. She played a Muslim woman and had to learn Urdu

In early 2013, Saran appeared in an item number in the film Zila Ghaziabad. This was her first item number in a Hindi film. On 7 June, Saran’s Pavitra was released, in which she played a prostitute.

She appeared opposite Ajay Devgan in Drishyam, a remake of the Malayalam film of the same name, which turned out to be a box office success.

In May 2016, she was cast as a female lead in the Telugu-language epic historical action film Gautamiputra Satakarni.

Saran started her modeling career by acting in a Pond’s Creams advertisement. She then did a Coca-Cola advertisement alongside Tamil actor Vijay.

In 2011, Saran was appointed as the promotional model for McVitie’s by United Biscuits along with actress Bipasha Basu.

In 2013, Saran was appointed as brand ambassador for Colgate Active Salt Healthy White toothpaste, along with Bollywood actress Kareena Kapoor.

In 2014, she was signed as brand ambassador for Karnataka Milk Federation(KMF).

Some Facts About Shriya Saran