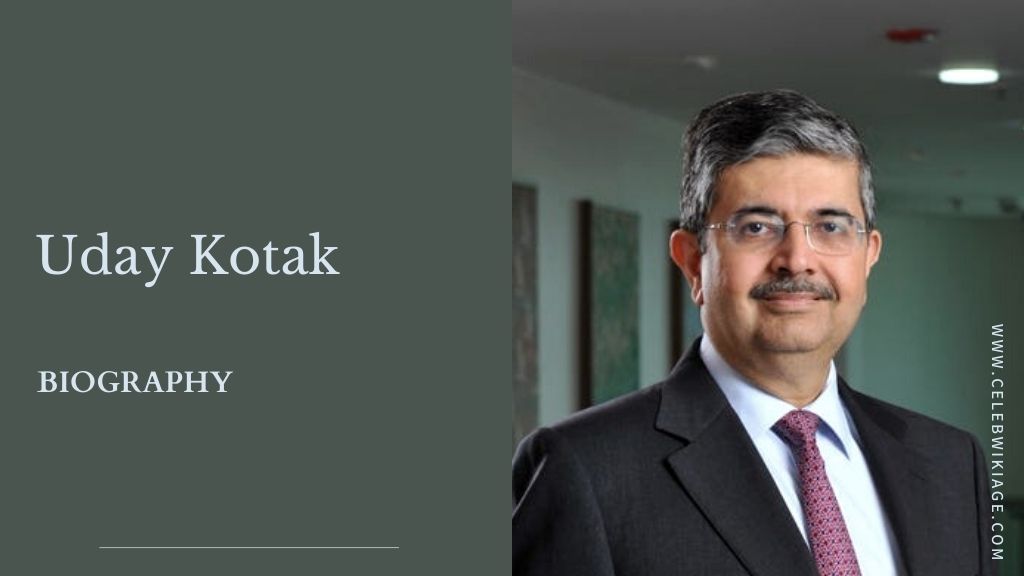 On 22 March 2003, it became the first company in India’s corporate history to receive a banking license from the Reserve Bank of India.

He is also the Chairman of the Indian infrastructure development and finance company, Infrastructure Leasing & Financial Services (IL&FS). As of March 2022, he has an estimated net worth of $14.5 billion.

Uday Kotak was born 15 March 1959 to Ramesh Kotak and his wife in an upper-middle-class Gujarati Lohana joint-family in Mumbai, which was into the cotton trading business. His father had returned to India from Karachi after Partition.

Uday was raised in a joint-family household with 60 persons under one roof in a large house in Babulnath. His joint-family was originally into cotton and other agricultural commodities trading business.

Kotak completed his schooling in Hindi Vidya Bhavan. Uday completed his college and received his B.com degree from Sydenham College of Commerce and Economics.

He obtained his post-graduation degree from the Jamnalal Bajaj Institute of Management Studies.

He is married to Pallavi Kotak, a marathon runner. They got married within two months of dating. They met at a party for the first time and fell in love. Pallavi supported him to begin his own business.

She could be regarded as the main driving force behind his success. The couple has two children and resides in Mumbai.

Dhawal, the younger son is involved in providing mid-day meals to underprivileged students in Govandi-Chembur-Deonar belt in eastern Mumbai. Dhaval wants to feed a million children every day. Dhaval is an undergraduate from Yale University

After completing his MBA, Kotak was set to join Hindustan Unilever, an Indian subsidiary of the multinational consumer goods company (FMCG Company).

Then he decided to try his hands at business, Uday joined his family business where he would have to deal with family members. Uday was always very keen on finance. He was no longer interested to continue with it.

While doing his MBA, Kotak decided to start out on his own, in the early 1980s, on his father’s insistence, Kotak started his own small financial agency at Navsari building premise from a 300 sq. ft. office space that his father offered him and said: “Son, you do what you want.”

Uday started his finance and bill discounting business with a seed capital borrowed from family and friends. The major part of investment comes from his best friend Anand Mahindra. Therefore the financial agency was named Kotak Mahindra.

Uday Kotak’s strong belief that trust is the key for any financial services, later, he collaborated with the Mahindra Group and brought in the new name ‘Kotak Mahindra’.

Uday ended the partnership with Goldman Sachs by acquiring its 25% stake in two subsidiaries for $72 million in 2006.

In 2014, Kotak converted a bill-discounting business into a financial services conglomerate and become the 2nd largest scheduled commercial bank in India by market capitalization with more than 1270 branches.

In 2015, Kotak Mahindra Bank had partnered with the telco-giant Airtel and ventured into general insurance to start a small payments bank.

He started a bill discounting business in 1986, then entered into the hire purchase and lease market in 1987. Uday started the auto finance division in 1990.

Uday included his distribution and brokerage businesses into Securities Company in 1995. He also incorporated his investment banking division into Kotak Mahindra Capital Company in 1995.

In 1996, Uday Kotak bought a stake in Ford Credit and his car finance company was hived off into a Kotak Mahindra Prime Limited, a separate Auto Finance Company.

In 2000, He tied up with a pan-African investment, banking, savings, insurance group, Old Mutual Limited and started a life insurance business in India.

He transformed Kotak Mahindra Finance Limited into a Kotak Bank in 2003 which became the first Indian non-banking finance company to do so and received a banking license from the Reserve Bank of India -RBI.

Kotak bought the 25% stake in Kotak Securities and Kotak Mahindra Capital Company which was held by Goldman Sachs in 2006.

Uday started a pension fund under the pension scheme in 2008. Uday Kotak entered as an anchor investor in Ahmedabad Commodity Exchange in 2009. He opened a representative office in Dubai of Kotak Mahindra Bank in 2009.

Uday Kotak has been honored with many awards which are listed below: